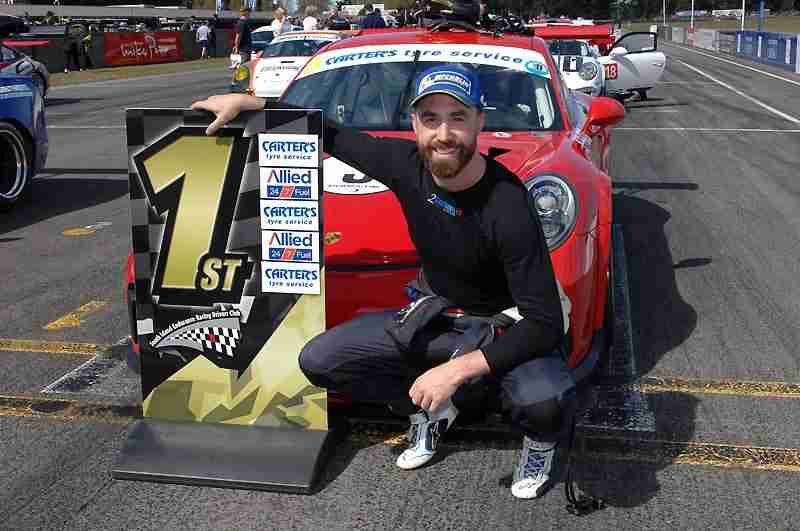 Having won the 2017 series, Henderson was not expecting a repeat performance in 2018. “Very happy with that,” commented Henderson. “We are surprise winners as we expected some bad luck which never came. It was awfully busy out there with traffic, so happy to finish where we did.” Henderson had won the opening round at Teretonga, Invercargill then finished fourth at Ruapuna two weeks’ ago.

Whittaker added to his first win two weeks’ ago at the second round in Christchurch. Having missed the opening round with preparing his brand new Gen2 Porsche 991, the objective was to qualify for the national endurance race later in the year at Highlands Motorsport Park in Cromwell.

“The car is going great, although we still haven’t sorted it completely,” commented Whittaker. “Hopefully we have qualified as missing a round can really hurt.”

While Henderson put his very quick Toyota Corolla on pole it was Whittaker that immediately took the lead with both Henderson and Shepherd slotting in behind him. This was the order of racing for the next 60 minutes with all three finishing in sight of each other at the chequered flag.

Henderson sustained some minor panel damage from traffic early in the race and was blacked flagged requiring a pit stop to fix a rubbing panel. Meanwhile Shepherd was hoping for a safety car.

“Yeah, we had been hoping for a safety car which never happened,” said Shepherd. “We would have pitted during that time, but it never happened. We just don’t have the pace of the front two but third overall is more than we hoped to achieve.”

The top 20 drivers now qualify for the New Zealand One Hour Endurance Championship event at Highlands Motorsport Park on 24 November 2018.