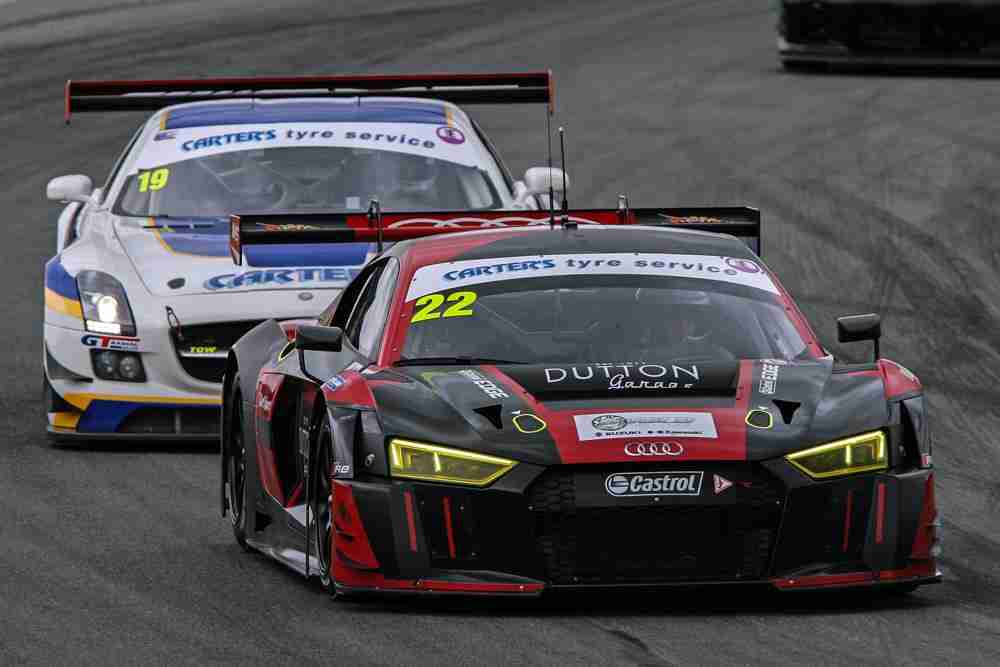 Foster’s Audi R8 LMS GT3 won all three series races along with co-drivers Jonny Reid (round 1 & 2) and Gene Rollinson (round 3).

Second home at the Timaru round was the series sponsor’s Carter’s Tyres Mercedes SLS AMG GT3 driven by Dwayne Carter and Shane Hodgson followed by the Marco Schelp/Matt Hamilton Porsche Cup S and the Scott O’Donnell/Allan Dippie Porsche 991 in fourth.

“I couldn’t be happier with that result,” Foster said.

“Three in a row and a couple of lap records is a great result for the team.”

Rollinson had lapped the entire field before the 30-minute mark and set a new lap record of 58.626 seconds in the race.

“We decided to put Gene (Rollinson) in the car first to put a gap on the field which worked well for us.”

Heading into the final three-hour race, 12 different teams had a mathematical chance of winning the title including the Ben Byers/Jaxon Evans Audi R8 Ultra GT3 and the George McFarlane/Jack Milligan Porsche 997 GT3R. Both suffered transmission problems with the Audi retiring and the Porsche rejoining the race but down in 26th place.

While Foster/Rollinson stayed out in front it left their rivals fighting for podium places. Two safety car periods did little to change the running order other than to allow a quick splash and dash for the Carter’s Mercedes with 45 minutes remaining.

“We did that to make sure there weren’t any issues,” Dwayne Carter said.

“The car ran well with no hiccups or issues. We didn’t have the pace of the Audi but pleased for the team to bring her home in second.”

Thrilled to be third home was the pairing of Schelp and Hamilton. Having retired out of the first round after one hour and only completing two hours in the second round, the team was hadn’t expected a podium result.

“Matt did a great job and with one stop it set me up to bring the car home and get a good result. Hopefully we have done enough to qualify for the NZ champs in November.”

As well as the overall title and five Class titles, drivers’ and teams were also looking to qualify for the New Zealand One Hour Endurance Championship event at Highlands Motorsport Park on 24 November 2018. Twenty places are available for not just the quickest but more for the most reliable finishers over the three rounds.

While Foster claimed the title, it was the consistent performances over the three rounds from the O’Donnell/Dippie and Tim Mackersey/Barry Moore pairings that saw them second and third overall.

Foster also took the Class E win ahead of Carter/Hodgson and McFarlane/Milligan pairings.

The ever-consistent duo of Allan Dippie/Scott O’Donnell (Porsche) finished fourth in the round and cemented overall honours in Class D ahead of the Paul Rickerby /Graeme Rhodes Falcon V8ST with the Schelp/ Hamilton Porsche 997 Cup S third.

Series winner of Class C (2001-3500cc) was the Mazda RX8 V8 of Grant Williams/Ben Williams/Rick Matheson finishing ahead of the NZV8 spec Falcon of Kevin Underwood/Jordan Michels. Third was the Holden Camaro of Bruce Tinnelly/Ryan Tinnelly.

The TCR spec VW Golf of Tim Mackersey/Barry Moore that led Class B (2001-3500cc) heading into the round won the class ahead of the older spec Seat Leon Supercopa of Mike Driver/Simon McLennan. Third on points was Pat Heagney/Ryan Heagney’s (Toyota Sprinter Turbo).